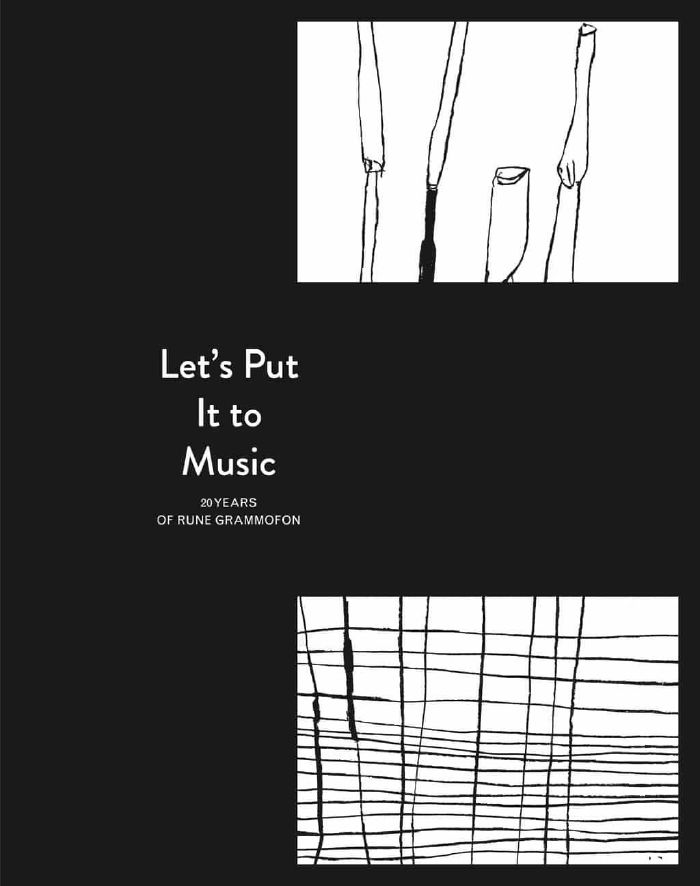 After having borrowed lines from Jimi Hendrix and English poets for all previous anniversary releases we struck out for this one until Kim, well after the deadline, accidentally stumbled over Johnny Cash and "Forever Words: The Unknown Poems". "Let's Put It To Music" quite nails it when it comes to the basic idea of the book and how we approach the whole process of making a record.

As Tim Gane is quotet in Adrian Shaughnessy's introduction "a Stereolab record was never finished until the cover was done". That rings true for Rune Grammofon as well, and we would like to add that a sleeve is never designed for the sole purpose of selling a product (it took 28 releases before an artist was pictured on the sleeve!), or necessarily reflect the music in any way (is that even possible?), but rather to establish a suggestive relation between the two, often based on the album title or a song title, but not in an obvious way.
After some 200 releases, I can't remember Kim ever "explaining" a sleeve design, and I can't remember me ever asking him. It's no secret that label founder Rune Kristoffersen is a big admirer of labels like Blue Note, Impulse, ECM, 4AD and Factory, to mention some labels with strong visual identities. But we can't recall another label that has worked with one designer exclusively for 20 years and 200 releases.

The exclusivity was a premise for our collaboration from the very beginning, but we certainly never had any expectations about how long we would be able to keep it going. Especially when considering that Kim is occupied on a number of arenas; as photographer, filmmaker, illustrator, painter, writer, musician, dancer and choreographer.
As one will discover, the book is far from being a catalog lining up the releases (it's not even "complete" or chronological in that sense), but gives an interesting insight by also including sketches, rejected designs and unused ideas that never left the drawing board... until now. Lists are a source of controversy, as Hedvig Mollestad discusses rather well in her text.

We haven't had much time for them either, but with the resurgence of music literature on all sort of subjects, they seem to have come alive again. And with the eclectic mix of artists on the label, why not give it a try? We figure the main funcion of lists is to arouse curiosity and hopefully lead to new cultural discoveries, which can only be a good thing. The idea of including a 7" single also came late and would depend on getting at last one track real quickly. To our delight, we miraculously ended up with what is surely three of the most beautiful tracks in our catalog, and all exclusive for this release.

Side B:
1. Maja SK Ratkje - Sja, Amioda
2. The Last Hurrah!! With Nora Zheng - Blues In Chinatown

If you decide an equipment item is not suitable within 10 days of delivery, you can return it to us for a replacement or refund. Returns must be unused and in their original, undamaged packaging.

Some items are excluded from our money back guarantee, including:
• Computer software that has been unsealed or registered
• Any item that comes directly into contact with the nose, ears or mouth

To arrange a return, just contact our customer service department on 020 7424 2800 or email us at support@juno.co.uk

BEST MUSIC STORE: 5 TIME WINNERS
We'd like to know what you think of Juno's website. Please send us your comments and suggestions via our feedback page.